// ALL ABOUT THE LIGHTWEIGHT SHARPIE

The Australian Sharpie is one of the most iconic off-the-beach classes on offer for sailors in Australia, and its rich and vibrant history makes it a class that most sailors have some level of affinity towards. It seems that once you start sailing these iconic three-person dinghies you just become a part of a larger family – people may come and go over the years but it’s a class that you can always return to with ease.

The hull shape of these boats has not altered since the 1960s and only a few minor changes to the rules have been allowed. As a restricted development class, the aim of the Sharpie association is to safeguard the one-design element, while entertaining and promoting incremental change as it becomes cost effective and beneficial. It is no good if changes are made and only those with more money can afford to implement them, particularly if there is a substantial performance improvement as a result.

This is why the Sharpie mantra has and will always remain as being the best bang-for-your-buck class that not only provides affordable participation, but competitive racing, lifelong friendship, and an infectious and renowned off-water social scene.

So if you think that this is the class for you, or even if you want to come along to an event and get a feel for what it is all about, get in contact with us and experience what it’s like to FLY SHARPIE.

I raced in my first Sharpie nationals when I was 14 years old and from that point on I was completely hooked. The culture is like no other sport or class I’ve experienced and the racing is as good as it gets.

The Australian Sharpie class is raced in all six states in Australia, as well as in Canberra where the local fleet sails as part of the New South Wales Division. The fleet is strong in most states with numbers fluctuating as the years go by. In recent years, South Australia and Western Australia have had strong home fleets with great growth in fleets throughout New South Wales and Victoria.

Western Australia: The main hubs of Sharpie sailing in the West are the Mounts Bay and East Fremantle clubs with some boats also located in the country town of Busselton at the Geographe Bay Yacht Club.

New South Wales: There are strong New South Wales fleets in Canberra at the YMCA, ANU and Canberra clubs, as well as a strong fleet based out of the Port Kembla Sailing Club in Wollongong.

Tasmania: The Sandy Bay Sailing Club in Hobart is the hub of Sharpie sailing for the Tasmanians with a few other boats located at Cygnett Point.

Victoria: Mordialloc Sailing Club near Sandringham on Port Phillip Bay is the headquarters of Victorian Sharpies with boats also raced out of Melbourne clubs such as Black Rock, Parkdale and Davey’s Bay. There is also a great country fleet in Ballarat.

Queensland: The Brisbane clubs with a good Sharpie presence are Royal Queensland, Darling Point, Humpybong and Sandgate, with the Keppel Bay Sailing Club in Yeppoon holding the strongest country fleet.

Australian Lightweight Sharpies are a national one design class with a long history of evolution. The class is quite unusual in comparison to the majority of other dinghies, due to its distinctive shape, size and complement of crew, which is three including skipper, main hand and forward hand on trapeze.

The class originally evolved from the 12 square metre class used in the 1956 Olympics to form the basis of the Australian Heavyweight Sharpie; a solid wooden clinker style boat. With the increasing use of marine ply and the ‘need for speed’, the design was updated by the Addison brothers in Western Australia to take advantage of advances in sailing technology.

Heavyweight Sharpies still compete in regattas in Europe, with more than 60 boats regularly competing at European Sharpie Championships. For more information, you can visit the British Sharpie Owners Association website at sharpies.org.uk for more information. The Australian and British association often keep an open dialogue and have a keen interest in each others events.

Modern fibreglass boats of today still retain the distinctive hard chine design, which makes sailing Sharpies so fiendishly competitive. Recent developments include the use of larger spinnakers, digital compasses, and carbon booms and spinnaker poles. However, it must be noted that incremental developments have been controlled and sympathetic to the existing fleet, so as to not devalue the owner’s current investment. 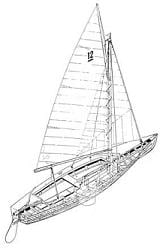