Close fleet sailing inspired the national television networks to cover the 2018 Sharpie Nationals being held in Yeppoon -Channel Nine was giving daily updates and Channel 7 got into the action interviewing race leaders, the organisers as well as the young champ from the ACT – watch it here.

Ashley Dyer took out the women’s title, the country championship – and her sister and father to fourth outright in a dominating performance at the nationals. Read more about It’s All About Me and this family’s success in the Port Lincoln news

It came right down to the last race with four boats capable of winning and Jacko was good enough to hold on, beating Chris Went on ‘Trump’ by half a point. Warpig took out the 73rd Sharpie National Championships, with Sam McCloud bringing the beast home a decisive 8 points ahead of Tony Turton’s Don’t Poke the Bear. The PINZ sponsored series had everything from strategy and light winds to raging bullets and bearded ladies, and only 15 points separated the top six boats at the conclusion of the seven (7) race series. Read more about how the veteran claimed his maiden on Down Under Sail

Full results for the 73rd Sharpie Nationals can be found on the Sandy Bay Sailing Club website.

By Harry Fisher, Down Under Sail, Photo above by Lou Hollis

AUSTRALIAN sharpie class stalwart Geoff “Sam” McCloud, with crew Sam Flint and Mark Beaumont in Warpig, has taken out his maiden national championship in a resounding win on the Derwent River in Hobart, Tasmania in early January.

McCloud, who has sailed sharpies for a number of decades and has achieved some great results in the past, clinched his first-ever national championship, which had always found a way to elude him in the past.

Sponsors of the 73rd Sharpie Nationals: Many thanks must go to the Sandy Bay Sailing Club for putting on such a great regatta and PINZ for its major sponsorship. Other sponsors included Killala Welding, Tassal, Tavern 42 Degrees South (T42), Prince of Wales Hotel, Down Under Sail, Gerard Horsman Photography, Fish Frenzy, Steve Walker Sails and Nutpatch.

Photos: Colleen Darcey took great photos at the Nationals in Hobart, more available through her Facebook album. Lou Hollis’ fantastic range of action shots across the Heats is also available to public access on Facebook. 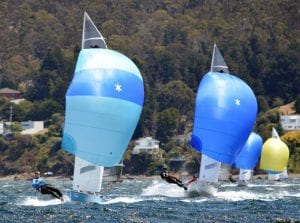 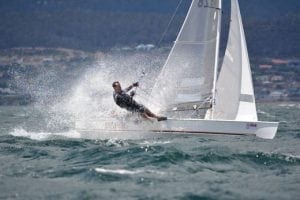 Full results of the 72nd Sharpie Nationals available here Read more on Down Under Sail Slideshows of each heat, with photos by Lou Hollis and Korinda Laine are available on Gallery page. Hartas Productions, one of the Regatta sponsors, captured the action with this stunning wrap-up video.

Sailed in South Australia over 27 December 2012 – 5 January 2013, a fleet of 66 Lightweight Sharpies battled it out in true Sharpie sailing conditions (20+ knots). With three crew per boat, it was one big regatta being hosted by Brighton Seacliffe Yachtclub, Adelaide, SA.

Blur, skippered by Mal Higgins with Sam Sanderson and Andrew Chisholm as crew, wins the Sharpie National Championship 2012. Sailed initially in strong conditions, winds eased to become moderate and shifty – perfect for the South Australian crew. The Sharpie Nationals were held on Waterloo Bay, Manly, hosted by the Royal Queensland Yacht Squadron. Great coverage of the racing across online media … 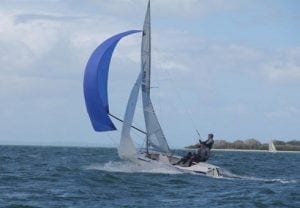 Some photos are available from Terrence Benade’s Gallery 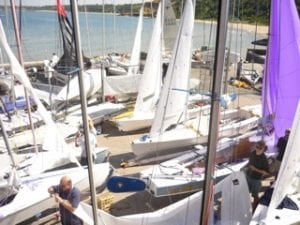 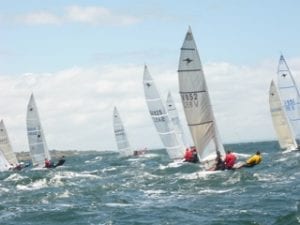 NSW boys Todd and Brad Curry and Hayden Sellers have taken out the Country title in Mr Freeze (N885). Dean Souter, Mark Ablett and Michael Denny in Rocket Fuels (N812) were on equal points for the Junior title, but tipped out by Ellen Fisher’s fantastic 5th placing in Race 6 in Pre-Mature (SA884) – beauty and brilliance really does conquer brawn and consistency – and old man emu Derek Milligan has the 50plus factor, with help from John Fisher and Andrew Breen on board Roger Ramjet (N747). A more detailed account will be available after the NSW team make their way back home.

Lake Illawarra provided the perfect setting for the 66th Australian Sharpie Championship. Port Kembla Sailing Club organized an excellent regatta based around a friendly family environment that was enjoyed and appreciated by all.

Mal Higgins, Sam Sanderson and Andrew Chisholm sailing “Blur” from South Australia with sensational boat tuning and handling were the catalyst for an impressive race record winning all bar one of the seven heats. Not since the days of John Cuneo, Sir James Hardy and John Bertrand was there such a dominant display. 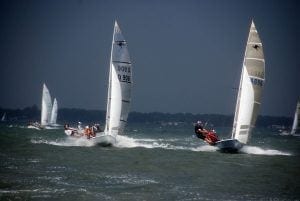 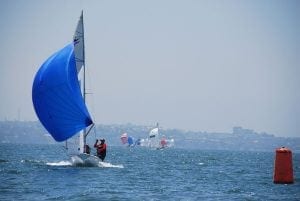 Held on the Swan River in WA and hosted by the East Fremantle Yacht Club, Wade Henson, Sam Abbot and Alan Hopping took home the 65th Sharpie Nationals title with a great performance in Vicious. The Lizard came in second, skippered by Peter Chappel with Marc Lewis and Michael Duffield on board, and the South Australians Geoff McCloud, Sam Flint and Mark Beaumont brought Pigout home in third, albeit on the same points as Malcom Higgins in Blur….

Visit the Gallery for video footage of this gybe, filmed on the Swan River during Heat 1 of the Nationals. Some stills from the heats are available in the Photos section.

While WA and SA battled it out for the top positions, NSW/ACT (the only other state to attend) was respresented by Suicide Blonde and Mr Freeze. The Blonde, skippered by Derek Milligan with Kevin Rosenbaum on main and Paul Cohen up front came in 24th. Chris Ablett injured himself in a practice session on Mr Freeze before the series started and, on doctor’s orders, had to retire and handed the tiller over to Mary Tulip. With Max Rosenbaum on main and Marc Ablett on the wire they found they were rather light at 190 kgs, but had a lot of fun and brought Mr Freeze home in 35th. After 10 seasons of unprecedented domination and fantastic sailing from the Smoke team, Team Truck skippered by Todd Curry Brad Curry and Haydos finally broke through for their first State Championship win, finishing 1 point ahead of Smoke over the 9 heat series, after 2 drops.

What a season it has been for the NSW fleet with over 20 boats contesting the title over the 3 rounds. The class is now sailing in ever-increasing numbers fuelled by an amazing culture formed by the people involved. Congratulations to the winners and everyone who made it an unforgettable series

Susanne Souter took some great photos of ROUND 1 of the regatta, held on Lake Illawarra. See the Kembla Klassic Facebook page.

Visit Rob Owe-Young’s Gallery of Photos from Round 2 at Balmoral – poor visibility limited the number of shots that could be taken!!

Smoke, skippered by Michael Forster with Daryl Roos and Tara Ducker as crew (pictured below) took out the NSW State titles for 2007/08.

More info and full RESULTS – follow the link for a full tally of each heat. 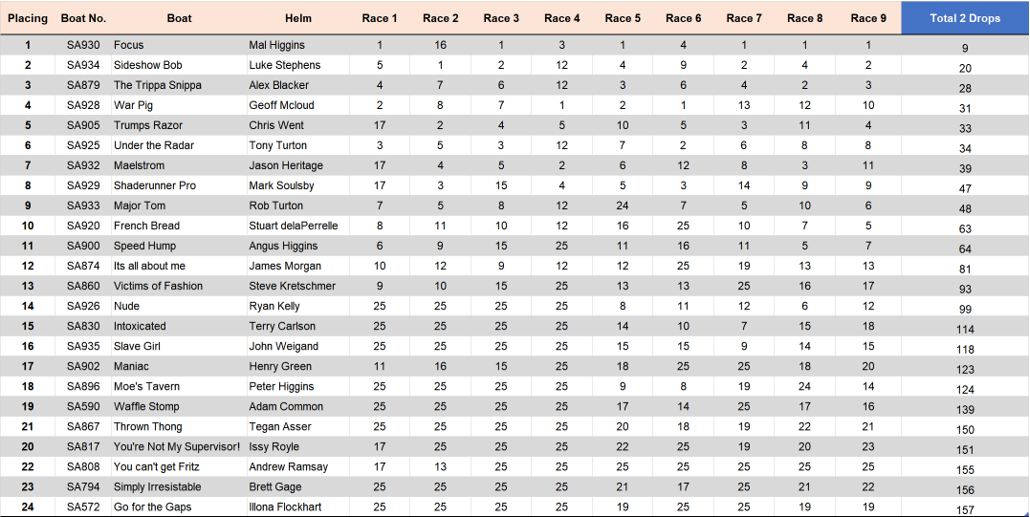 SA States wrapped up on the 6-7th February at Wallaroo on the Yorke Penninsula. This is a favourite venue for SA Sharpie sailors so much so that newly crowned National Champion “Sam” McCloud has a house there. The club has been rebuilt and has excellent facilities, ample rigging and ex-sharpie sailors who know how to please the competitors. It was a great weekend – check out Jibe Mark on Carnage Corner, with this video by David McCloud going viral….

The first round of the South Australian Sharpie States kicked off at Largs Bay in the middle of November and sailors were met with some ripping breezes. Three races were sailed on Saturday in a belting south-westerly sea breeze, which put every boat to the test.

Chris Went in Trump with Tom Manhood and Simon Hill were the standouts on the day finishing with a fourth in race one and two bullets in races two and three.
Mal Higgins in Focus with Sam Sanderson and Andrew Chisholm also had a consistent day finishing with three second places.
Geoff (Sam) McCloud in Warpig with Sam Flint and Mark Beaumont also had a good day out winning the first race and finishing second in the second race however were forced to retire from race three due to a breakage.
The breeze lightened off for the the first of two scheduled races on Sunday and it was sailed in a moderate westerly breeze around 10 knots and quite shifty. There was one question on a few people’s minds, #wheresbear?
Robbie Deussen skippered Don’t Poke the Bear in the absence of Tony Turton with Andrew Dallison and Mark Kretschmer and was around the mark all weekend.
However a couple unfortunate results including a DNF (did not finish) in race two on Saturday and a black flag disqualification in the first race on Sunday did not help him at all.
Focus was able to take the win in Sunday’s first race ahead of Warpig in second.
Luke Stephens skippering Pre-Mature with James Flint and Harry Fisher snuck in to third place after the disqualification of Don’t Poke the Bear.
Following a rather long postponement between the last two races of the weekend, the sea breeze came in and picked up to make the final race of the weekend yet another exciting one.
Warpig capped off a consistent weekend, with the exception of the DNF on Saturday to pinch the final race only seven seconds ahead of Don’t Poke the Bear in second and Focus in third.
There were some great performances throughout the rest of the fleet across the entire weekend as well.
Jason Heritage in Bread Run with Cameron Larkin and James Hughes finished the weekend with four fourths and a shitter and have put themselves in a strong position to have a crack at a podium finish.
Peter Higgins in Moe’s also sailed consistently and finished with some good results while Dave Snoad in Beer Nuts and Luke Stephens in Pre-Mature were around the mark all weekend.
Some heartbreak for young guns Ryan Kelly, Sean Keen and Tom Schnaars in Nude who suffered a broken lower and boom in the first race of the weekend resulting in a bent mast and five unfinished races. Although their quest for a state championship this year is no longer possible, expect these guys to come out strong for the nationals in Hobart in January.

Overall a very successful weekend and once again it looks like Focus will be the boat to beat, yet again. Read more on the SA Associations Facebook pages

12 February 2011, Saturday saw Peter Chappel in the Lizard a little below brilliant, by the Sunday he was on fire. 27 boats out and two on the beach – the WA target for next season is 40. The regatta format of two lap windward leewards worked well at around 30 to 40 minutes in duration… read more

The WA Sharpie Association States titles were held at the prestigious Fremantle Sailing Club over the weekend of Feb 9 and 10. Andy Curnow and his trusty start crew from MBSC and Kev Tidy from EFSC ran a great regatta with a skeleton crew – and sometimes it’s just blantanly obvious what a bit of tidy sailing can do…. read more 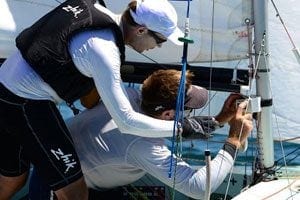 The second stage of the Queenlsand state titles was held at Sandgate Yacht Club on the 9 and 10 April 2011.

On Saturday the breeze came in around 14 – 16 knots, probably the best wind we’ve had all this season. Having an inkling the wind was going to be light on Sunday, we crammed in 3 short 40 minute races on Saturday, and it was all great fun.

Elke, Sam and Rowan on the Gingerbread Man gave us all a great lesson in boat speed on the Saturday, and came from behind to win the light heat on Sunday proving excellent consistency and skill to win in the testing 5 – 7 knot breeze for Heat 8.
The local guys on Ullman Sails skippered by Jonno Freeman were also consistent, getting mostly second places, with Damian from Yeppoon performing well to grab 3rd place overall.

We were all thankful for the great courses and organisation by the Sandgate Yacht Club crew, including the hot snags and cold beers after the races.

Know of any results that aren’t listed on the site? Please let us know so that we can update the information on this page
Let us know!
X