Historical – An Interview with Jack Graham 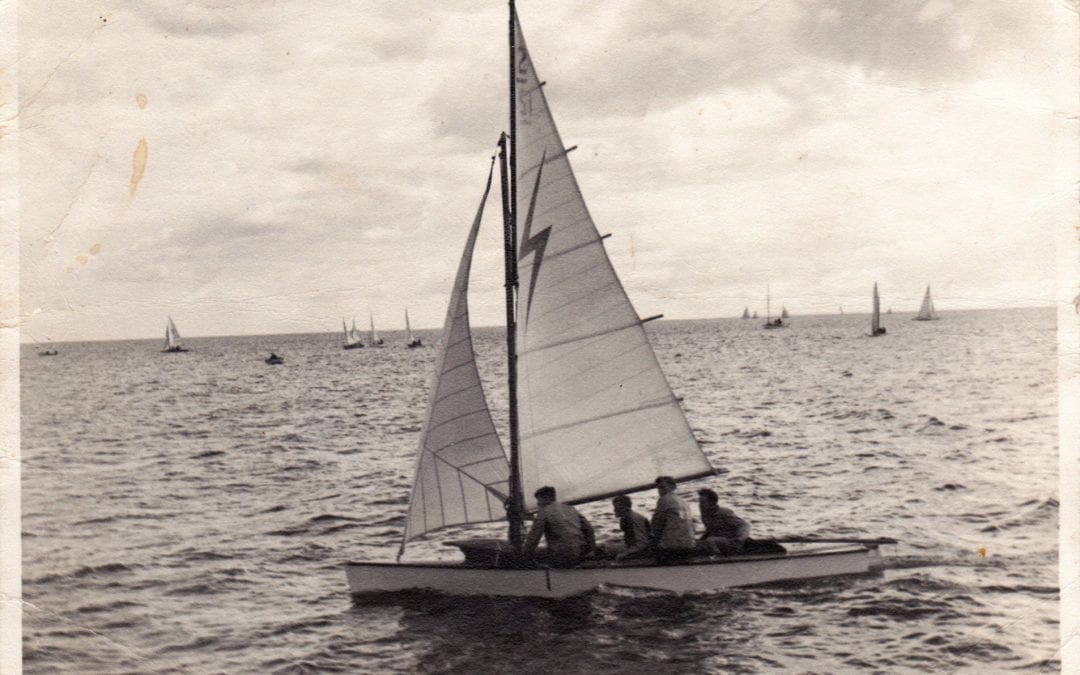 This story is courtesy of the Black Rock Yacht Club and was published in the club’s e-newsletter on 14 September.

An interesting insight into the beginnings of “off the beach” racing at Black Rock. Jack who was the father of long time members, John & Bob Graham, was one of a small group whose enthusiasm laid the foundation of the 12 Square Metre (Heavyweight) Sharpie as the initial “dinghy of choice” for racing at Black Rock.

This is his story:

“I joined Black Rock Yacht Club about 1937.I used to sail 14 Footers at the St Kilda 14 Ft Sailing Club, but when the first Heavyweight Sharpies came along, things changed. A few people at St Kilda became interested in the Sharpie because it was a “one design” class, where the 14 Footers were not.  Many felt the Sharpie would be cheaper and they sailed so well. The 14s were terribly expensive things to buy and they could become out of date overnight by some new design, so you would have to build a new boat. One of the first in Melbourne to take an interest in a Sharpie was Black Rock stalwart, Bill Hay. He decided to build one in his backyard, but myself and George Grimsley approached the Savage boatbuilding company in Williamstown to build two Sharpies. They quoted 30 pounds for a completed hull and spars and we had to outlay a further 12 pounds & 10 shillings for a set of sails. We had to make our own fittings, plus the rudder and centre board. The rudder blade and centre board were made of iron and had to be galvanised. George and I had been sailing together in a 14 Footer at the St Kilda 14 Ft Dinghy Club. Commodore of the 14 club at the time was Sir Charles Marshall, my Grandfather, but that didn’t help, they didn’t want Sharpies and we had to leave.

“When we left the St Kilda 14 club the only place we could find to sail was Port Melbourne. We sailed there for one season, but it was a shocking place. We had to lug our Sharpies over the sand and put up with gang fights on the beach all around us. After our two Sharpies the next was Bill Hay so the Victorian 12 Square Metre Association was formed. It consisted of Bill hay, George Grimsley, Mick Brooke (President), myself (Jack Graham) and Tom Tunnicliffe. Just before Bill Hay finished his boat we decided to sail down to Black Rock so he and other Black Rock members could have a look at our boats. Jack Kirkham and Jack Wall went for a sail in our boats and didn’t want to come back. We had to sail back to Port Melbourne so we became a little concerned, but they just didn’t want to get out of the boats. The newly formed Association contacted clubs around the bay to get Sharpie races included in their regattas, so we used to sail around the Bay to the various regattas in all weathers to show off the Sharpies. We were 18 and full of enthusiasm and also regularly sailed to Black Rock on Sundays. The following year we decided that Port Melbourne was not the place for Sharpies so we moved to the Williamstown Punt Club. Black Rock was still an awful long way as we lived in Clifton Hill and no cars then. After a season at Williamstown and still visiting Black Rock on Sundays we decided to make the move. The Sharpies were encouraged at Black Rock and the 14 Footers at the club were dying so the Sharpie was to become the backbone of the club.”

The photo above shows Jack Graham in his Sharpie Te Uira, which is Mouri for “Little Lightning”. Jack’s Grandfather, Sir Charles Marshall had a big boat at StKilda called Uira. Notice the Sharpie is 4 up as in the early days there was no trapeze.