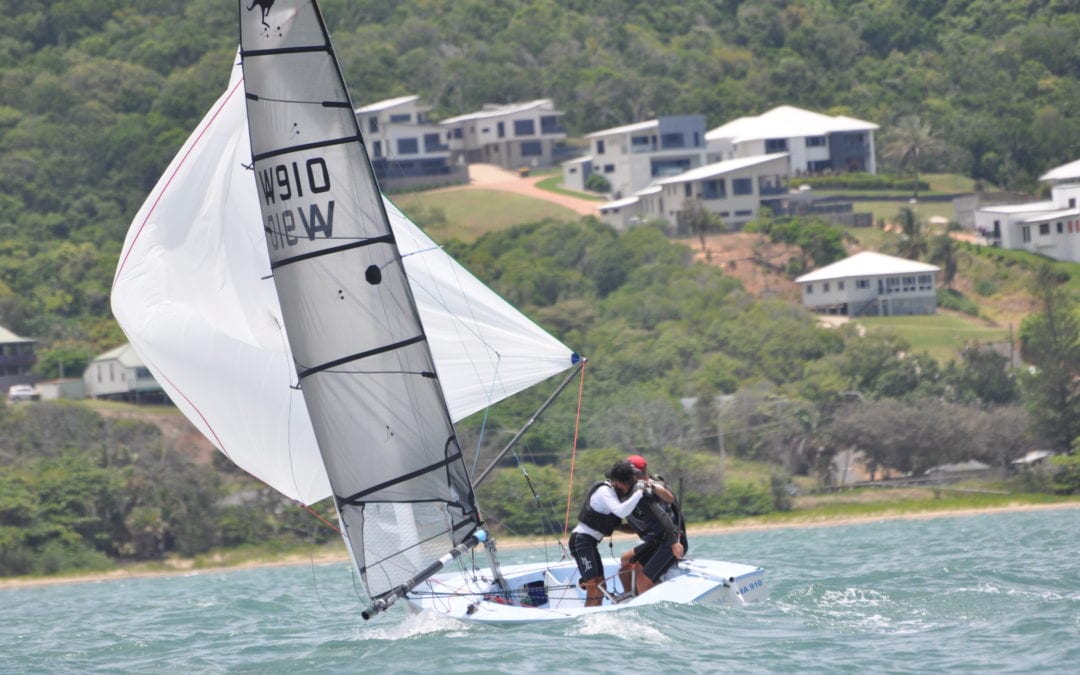 Ash Gabrielson’s heartwarming victory at the Keppel Bay Sailing Club last summer clinched a lifetime goal for the veteran skipper and capped off many seasons of hard work.

Sailing WA910 The Purple Circle with Mark Lewis in the middle and Peter Ivanac up the front, Ash won the eight-race series with a race to spare after sailing a smart and consistent regatta, not falling outside the top two until the ﬁnal race.

Gabrielson was able to hold off Chris Went, Tom Manhood and Harry Fisher in ‘Went Management’, and Jason Heritage, Angus Hughes and James Hughes in ‘Maelstrom’, who ﬁnished second and third respectively.

The victory was a special one for the Gabrielson family, with father and Western Australian Sharpie legend, Rube, also in attendance to see his son achieve what was described as “the holy grail”.

It also capped off an incredible journey for Ash and sheet hand Mark Lewis, who traveled to the east coast from Perth for the third year in a row, after regattas in Melbourne and Hobart the two years prior.

Regular forward hand Ian “Grinder” Davidson was also a strong part of the campaign, having sailed with Ash and Lewie over many years but unfortunately he was unable to attend the nationals in Yeppoon.

Grinder shared in the celebrations with the team over the phone after they clinched the series and also jumped back on the boat for the remainder of the season.

He was a big part of the Purple Circle victory lap as well, which included the 2018 Port Lincoln Frostbite Regatta on the west coast of South Australia last June.

With all that being said, the biggest feelgood story of the Gabrielson victory was made clear on presentation night in Yeppoon, when sheet hand Mark Lewis referred to all in attendance as “the Sharpie family” saying it wouldn’t mean a thing if they weren’t able to share the win with a great group of competitors.

He also paid tribute especially to Ash, labelling him not only as a hard-working and passionate helmsman, but one of his best and most adored lifelong friends.

Following their victory, the team had a heroes welcome at the Mounts Bay Sailing Club with sailors, friends, family and legends of the WA Sharpies all making it down to Mounts to celebrate with the newly-crowned champions.

They were also honoured by their peak body of sailing in the west, Yachting Western Australia, who hosted a ceremony to present awards to all local boats that were good enough to clinch national titles.

Now a year on and heading into the 76th Sharpie Nationals, The Gulf War, at Adelaide Sailing Club, the original Purple Circle team of Ash, Lewie and Grinder reunites for a shot at back-to-back titles.

Meanwhile, champion forward hand Peter Ivanac teams up with one of Western Australia’s most accredited international sailors, Dave Mann, on board WA908 Wise Magic, which is also expected to perform well.

The Western Australians are set to bring a 12-strong ﬂeet to the Adelaide nationals, one of their strongest interstate showings in recent years, as they get set to host the 77th Nationals at Mounts Bay Sailing Club next summer.

The 2019/20 Sharpie Nationals is expected to be another one not to miss, with the Fremantle doctor’s cranking sea breezes already booked in one year out from the event.

For more information on the WA Nationals, be sure to look out for Sharpie Man, aka Captain Cunningham, aka Stanas, Western Australia’s Sharpie President Neil Stanbury, in the boat park. He will be sailing the beautifully signwritten WA807, Just Suburban Boys.